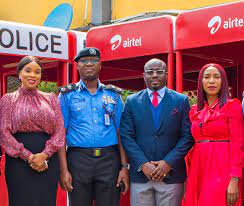 Airtel Nigeria has donated traffic booths to the Lagos Police Command to support its activities in ensuring coordination and safety of road users.

This is contained in a statement signed by Femi Adeniran, the Director of Corporate Communications, Airtel Nigeria, on Saturday in Lagos.

The statement noted that the company had been working closely with the Lagos Police Command over the years.

The statement said that Airtel had collaborated on several initiatives with the police as a way of making a positive impact toward making Lagos safer and more secured.

“We are firm in our resolve to consistently drive the vision of Airtel Africa toward sustainability and we consistently work to demonstrate this in our deeds through our corporate social responsibility interventions.

“We are always glad to support the police force in the great work that they do daily, because we understand that once there is security, people can live and make ends meet without fear,” it said.

The statement quoted the Lagos State Commissioner of Police, Sylvester Alabi, as saying that the company had been supportive over the years.

Alabi said that the company had been showing support, some of which included donation of phones to all police commission in Lagos, donation of patrol vehicles, and the provision of CCTV cameras, among others.

“On behalf of the Inspector-General of Police, Alkali Usman, and the Lagos State Police Command, I will like to thank Airtel for their support to the Nigerian Police over the years.

“We also appreciate this particular donation of traffic booths for our traffic officers through your corporate social responsibility,” he said.

According to Alabi, not every organisation appreciated what the police did for society.

He said the command was pleased to see that Airtel recognised and supported the effort of the police in carrying out their duties optimally.

Alabi said that the donated booths would be placed in strategic locations across the state to serve as an inspiration to other organisations to support the police in discharging their duties.