The ongoing crisis rocking the All-Progressives Congress, APC has forced Governors elected on the platform of the party to convene an emergency meeting in Abuja for today.

At the meeting, the governors will discuss Saturday’s APC state and local government congresses as well as the implication of Wednesday’s judgment of the Supreme Court on the Ondo State governorship election for the party.

The Chairman of the APC in Borno State and Chairman of the party’s Chairmen’s Forum, Ali Bukar Dalori, who gave these hints in an interview with one of The Punch’s correspondents in Maiduguri, stated that the outcome of the meeting would determine whether or not the party would go ahead with state and local government congresses scheduled to start on Saturday (tomorrow).

But the Caretaker/Extraordinary National Convention Planning Committee of the party at a press conference in Abuja insisted that the congresses would begin on Saturday as scheduled.

The committee dismissed claims that the Supreme Court in its judgment on the Ondo State governorship election declared Mai Bala Buni’s chairmanship of the caretaker panel illegal.

But a former National Legal Adviser of the APC, Dr Muiz Banire, the Special Adviser to the President on Political Matters, Senator Babafemi Ojudu and the Senior Special Assistant to the President on Niger Delta Affairs, Senator Ita Enang, advised the party against holding the congresses in view of the controversy over the judgment as it affected Buni, who is also the Governor of Yobe State.

There were reports on Wednesday that all the seven Supreme Court Justices who gave judgments on the Ondo State governorship election agreed on the constitutional point that a sitting governor could not hold the dual elective position of governor and party national chairman.

The apex court in its judgment declared the Ondo State Governor and APC candidate, Rotimi Akeredolu, SAN, winner of the state 2020 election and dismissed the appeal filed by the candidate of the Peoples Democratic Party, Eyitayo Jegede (SAN).

The Minister of Labour and Employment, Festus Keyamo (SAN), had on Wednesday said, “The technical point that saved the Governor Akeredolu was that Jegede failed to join Governor Mai Mala Buni in the suit.

“The Supreme Court has just weaponised all those that would be aggrieved by the APC congresses to proceed to court to challenge the competence of the Buni-led committee to organise the congresses and national convention.”

Govs are meeting on Friday, we will know direction after parley – Chair, APC chairmen’s forum

The Chairman of the APC Chairmen’s Forum, Dalori, told The PUNCH that the party headquarters had directed state chapters to continue with the preparations for the congresses.

When our correspondent in Borno State asked him if the party was going ahead with the congresses, Dalori stated, “You know I am a loyal party man …The party communicated to us to continue with preparations for the congresses pending the outcome of their meeting tomorrow.

“The state governors are meeting tomorrow so I cannot categorically say whether we’ll hold the congresses or they will say we should postpone them.

“The governors have converged on Abuja for an emergency meeting tomorrow. After that meeting, we’ll know the position of the party and the direction they want to follow. Don’t worry, by tomorrow we shall know what’s going to happen.”

But the Lead Counsel to the APC in the suit, Adeniyi Akintola (SAN), at a media briefing in Abuja, on Thursday, said, “There is nowhere in the judgment of the majority where the efficacy of the office of our national chairman was questioned.

“If anything, what happened was that the judgment of the tribunal that says that the holding of party position doesn’t contravene section 183 of the constitution still stands.

“That was the judgment that was given by the tribunal and upheld by the Court of Appeal and Supreme Court. I don’t know why people are attributing so much to the judgment of the minority. It is of no value.”

He urged Buni to continue to discharge his responsibilities because he had the law on his side.

The Secretary of the caretaker committee, Senator John Akpanudoedehe, who also spoke at the briefing, berated party members whom he said were scared of the congresses. He alleged that they were misinforming the public.

Akpanudoedehe said, “I want to assure them, the congresses will be fair, transparent and I will advise them to go into their wards and be good party men and not to destroy the party.

“At this point in time, on behalf of the caretaker committee, we stand firmly with the national chairman and we declare our unalloyed loyalty to him and the President.”

On his part, Banire, cautioned the APC against taking steps it would later regret.

He said although he, like most Nigerians, had yet to get a copy of the entire judgment to study it, it was imperative to consider the implication of the judgment.

Banire said, “The issue is not even a minority judgment. There are two parts of that judgment from what is being circulated all over the place.

“There is the aspect of the fact that the persons who signed ought not to sign and the aspect that he should have been joined.

“On the first issue it was unanimous among everybody there was no minority there. It was on the second one that you had a minority.

“It was the part on whether or not Buni himself ought to have been included in the minority area.

“If we are to take what is in circulation for its face value, it means that what they have said unanimously represents their position on that.

“So, there is no minority on that as far as I’m concerned. On the fact of the propriety or not of his occupation of that office, there is unanimity from what has been circulated.”

Asked if he would advise that the congresses should go ahead as planned, he said, “It would be irresponsible to go ahead with Saturday’s congresses. The situation is cloudy. To that extent, a reasonable manager will tarry a bit.

“My expectation is that they should struggle to get copies of the judgment, assemble a legal team to analyse  it and give an informed legal position, convene a meeting of the National Executive Committee of the party and take the right decision thereafter.

“That is what I would have expected not to just ignore the judgment. This is the kind of impunity that has been landing the APC in trouble and they seem not to have learnt a lesson.”

A former federal lawmaker, representing Rivers South-east Senatorial District, Rivers State, Senator Magnus Abe, disagreed with the position of  Keyamo who suggested that the Buni-led committee should be dissolved and the planned congresses halted.

In a statement in Port Harcourt, on Thursday, Abe, who is a board member of the Nigerian National Petroleum Corporation, expressed surprise over Keyamo’s new position.

According to him, Keyamo’s argument premised on his interpretation of the judgment of the Supreme Court of Nigeria in Jegede versus Akeredolu was baseless since the defence of Buni, who is the chairman of the party was never heard.

The former Senator noted that most members of the APC accepted the reality of the CECPC as a decision of the National Executive Committee with the President, Major General Muhammadu Buhari (retd.), as leader in attendance.

He noted that APC leaders who had reservations about the constitution of the CECPC were informed that the decision to establish the committee was reached only after extensive legal examination of the issues confronting the APC at that time by a body of eminent lawyers in leadership positions within the APC. 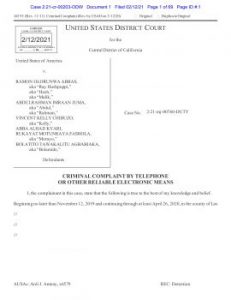