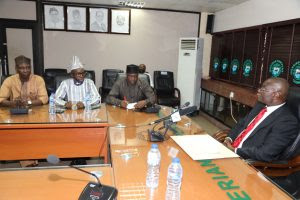 The dry ports would soon be completed and put to use as government intensifies efforts to broaden and diversify Nigeria’s economy, Emmanuel Jime, Executive Secretary, Nigerian’ Shippers’ Council (NSC), has said.

Jime told the News Agency of Nigeria (NAN) in Lagos that operations had begun in the Kaduna dry port while others had attained more than 80 percent completion.

The dry ports are expected to serve as a catalyst for trade stimulation and economic development by bringing shipping services to the doorstep of shippers across the nation.

They are also expected to assist in decongesting the seaports and make them more user-friendly.

Jime, while referring to the dry ports as “very crucial to Nigeria’s economic success”, expressed satisfaction with the Public-Private-Partnership arrangements towards their completion and effective take-off.

He commended the efforts of the host state governments and concessionaires towards the speedy completion of the projects, urging all stakeholders to sustain the tempo.

Jime particularly commended the Plateau government for injecting funds into the Heipang dry port and expressed confidence that it would soon come to life.

“The state government’s effort is mitigating the funding gap. This is encouraging and commendable,” he said.

On the Ibadan dry port,  Jime said that issues around the contract agreements, especially the payment of compensation, were being resolved to make way for its speedy completion.

He regretted, however, that most investors prefer areas with short-term turn around in profit making, saying that the situation had consistently created some funding challenge for the dry ports.

Jime said that the dry ports remain the remedy for the congestion in the seaports usually caused by challenges of infrastructure, articulated vehicles and persistent gridlock.

He expressed happiness with the “very dramatic progress” in the Dala dry port in Kano that is 80 per cent ready, while the Abuja dry port had also recorded appreciable progress.

He also thanked the Abia government for waking up to the need to play its crucial role in the development of the dry port at Isiala Ngwa, urging it to sustain that tempo.

Jime said that the NSC would continue to encourage the partnership with the states toward completing the dry ports in view of their relevance to the nation’s economic growth.

He also spoke on the need for an effective and efficient railway as a primary mode for long-distance haulage.

“A functional railway will assist in the overall costs of cargo to hinterland locations and transit cargoes to landlocked countries,” he pointed out.

He said that NSC was working toward building a robust partnership with the nation’s railway authorities so that all the dry ports would attain their potential when they come on stream.

The NSC boss said that the Council had been able to resolve lots of disputes among shippers, and attributed the feat to “our robust complaints unit”.

He said that most of the disputes bordered on financial issues like demurrage, port charges and other basic disagreements.

Jime also spoke on the Lekki Deep Seaport in Lagos.

“We have always lost a lot of maritime clients to other countries. The Lekki Deep Seaport will change that. It will make Nigeria truly the hub of maritime activities.”

He called for more attention to the provision of traffic infrastructure in and around Lekki Deep Seaport to “avoid another Apapa there”.

Jime observed that there were many huge establishments, including refineries, around the area and expressed concern that the Apapa scenario could be replicated there if effective transport infrastructure was not put in place.He suggested a quick construction of a rail linkage to ward off possible congestion when activities begin at the Lekki Deep Seaport. (NAN)