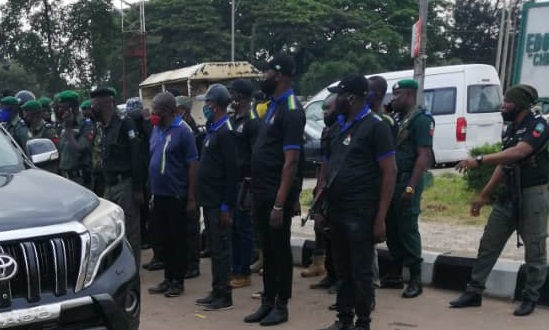 A coalition of civil society organisations in Edo has charged the state Police Command to publish the list of criminal suspects that escaped from the custody of the State Criminal Investigation Department on the New Year day.The group, under the aegis of Network of Civil Society Organisations of Nigeria (NOCSON), also charged the command to publish the names of its personnel on duty on the day of the jailbreak.

NOCSON acting President, Mr Ogbidi Emmanuel, and its Director of Publicity, Bevy Efe, made the demand at a news briefing on Thursday in Benin.

Emmanuel expressed shock that such incident could happen in the most secure police facility in the state without any external attack.

According to him, the incident could not have happened without sabotage.

He said the group was disappointed with the report they got when its members visited the police authorities in Benin on a fact-finding mission.

He said that the latest jailbreak in the city proved that a similar incident in the two correctional facilities in the state during the EndSARS protest was not done by the protesters.

“We therefore want the state government to set up an inquiry into all the recent jailbreaks in Benin.

“The Edo police command must declare the escapees wanted and also publish their names, photographs and information about them in local and national print and electronic media within the next 48 hours.

“The police must isolate and detain all the operatives who were on duty, including the senior officers that had dealings with the cell, 24 hours before the incident.

“We cannot rule out any of the officers’ possible contact with the suspects until investigations are concluded.

“The officers identified must be made known to the public. NOCSON insists that there is more to these jailbreaks in Edo than meets the eye.

“We, therefore, urge Gov. Godwin Obaseki, as the state’s Chief Security Officer, to urgently institue an inquiry into the circumstances surrounding the jailbreaks.

“The Nigeria Police must do everything possible to ensure effective policing in Edo,” Emmanuel said.

The group called for internal mechanism to be put in place to prevent future occurrence and restore Edo people’s confidence in the police.