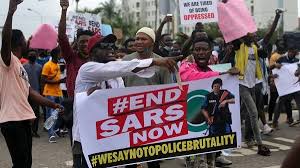 In a bid to forestall another round of #EndSARS protests, security operatives including police, soldiers, and officers of the civil defense have stormed Lekki toll gate in Lagos state.

This is even as huge crowds turned out for the #EndSARS protest in Lagos, Osun, Ogun, and Abuja. The youths vowed to continue the protest until their demands are met.

Meanwhile, the police in Ogun State have threatened to disrupt any new #EndSARS protest in the state.

The police in a statement signed by their spokesperson, Abimbola Oyeyemi, on Monday, said anyone found on the streets participating in any form of protest would face the full wrath of the law.

“It has come to the knowledge of Ogun State Police Command that some misguided individuals are planning to stage a violent protest tagged “ENDSARS Phase 11” today, 7th of December 2020 in Ogun state

While the command recognizes that it is the right of citizens to employ protest to express their grievances over issues of governance, there is however nothing at present that calls for such protest in the Gateway State, except for those who see troublemaking as a lucrative business.

No reasonable person after the massive destruction of properties and loss of lives occasioned by the recent #EndSARS protest would again be contemplating another violent protest so soon. It is the most callous thing to conceive and do.

In Ogun State, we have since the end of #EndSARS protest been enjoying well-deserved peace. Socio-economic activities have resumed fully. Schools have also resumed, and the children, in particular, can be seen happily resuming and closing from schools.

Only an enemy of the people, therefore, would wish to re-enact the #EndSARS mayhem,” part of the statement read.

The police spokesperson also said the organizers of the planned second phase of the protest are ‘irrational’ since “SARS is now history! It is mischievous therefore for anybody to protest against a non-existent outfit or any issue.

“The commissioner of police, therefore, advises parents, guardians and the youth to be wary of those who derive pleasure in a state of confusion and violence.”

In Lagos state, the Police Public Relations Officer, Muyiwa Adejobi, did not respond to calls on Monday morning or responded to text messages.

Recall that both the military and the police authorities had warned several times last week that they would not allow another round of protests to take place.

The #EndSARS protests, which took place in October, were hijacked by hoodlums leading to the destruction of properties and loss of lives.

The demonstrations also turned bloody in Lagos on October 20, 2020, when men in military uniform opened fire on young protesters at the Lekki toll plaza, an epicenter of the protests in Lagos.