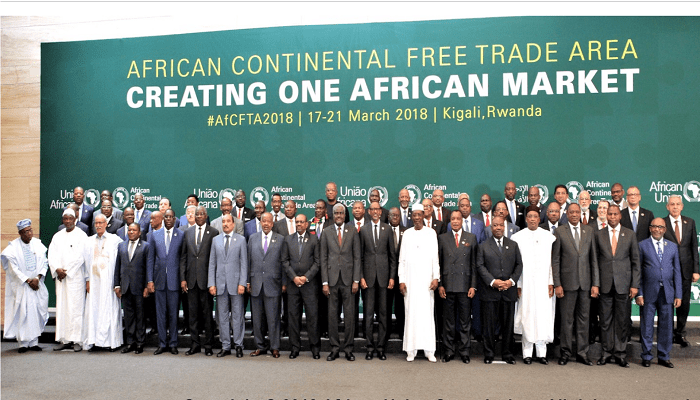 The Africa Continental Free Trade Agreement (AfCFTA), which will commence in the next two weeks, was designed to create the largest free trade area in the world measured by the number of countries participating.

The pact is to connect 1.3 billion people across 55 countries with a combined gross domestic product (GDP) valued at 3.4 trillion dollars.

The agreement initially requires members to remove tariffs from 90 per cent of goods, allowing free access to commodities, goods and services across the continent.

The United Nations Economic Commission for Africa estimates that the agreement will boost intra-African trade by 52 per cent by 2022.

The 55 member states of the Africa Union (AU) are establishing the AfCFTA to create a single continent-wide market for goods and services and to promote the movement of capital and natural persons.

The agreement has the potential to become a game changer and bring some great opportunities for entrepreneurs, such as: Improving the intra-African trade landscape and export structure; creating a sound global economic impact and developing better policy frameworks.

However, while some countries are yet to ratify the agreement, the 36 countries that have ratified the agreement include, Nigeria, Kenya, Ghana, Rwanda, Niger, Chad, Eswatini, Guinea, Uganda, Cote d’Ivoire.

On July 7, 2019 Nigeria signed the AfCFTA agreement in Niamey during the 12th extraordinary session of the Assembly of the African Union; the Federal Executive Council (FEC) ratified the agreement on Nov. 11, 2020.

However, the trade agreement is meant to touch every sector of the economy, including oil and natural resources which could be found in every country in Africa continent.

Looking at some countries blessed with abundant minerals in the continent, the agreement might become a game changer that could impact greatly to their Gross Domestic Products (GDP)

1. Ghana – One of the Dark Continent’s top gold mining countries, grabbed the top spot from South Africa after mining more than 142 metric tonnes of the precious metal in 2019.

The minerals mined in Ghana account for 37 per cent of the country’s total exports, with gold comprising 90 per cent of total mineral exports. Ghana’s gold reserves is estimated to be 1,000 metric tonnes.

2. South Africa –Declining gold ore grades in South Africa over the past eight decades have seen the country lose its African top spot to Ghana.

In spite of diminishing gold reserves, South Africa is still estimated to possess 6,000 metric tonnes (second-largest in the world), according to 2018 Mining Global data.

3. Mali – The north-west African country of Mali produced more than 71 metric tonnes of gold in 2019, a sizeable jump from the 61.2 tonnes in 2018 — placing it on fourth in list of the continent’s top gold producers.

Mali’s gold mining operations not only involve large mining companies, but also artisanal miners, who have also produced a sizeable chunk of gold and made a significant contribution to the country’s economy.

Mali is estimated to have 800 metric tonnes of gold reserves, according to Norwegian website Eiti.org.

4. Tanzania has a wide variety of minerals including diamonds, gold, base metals, gemstones (including the unique Tanzanite) and a variety of industrial minerals (such as phosphates, mica, gypsum, limestone, graphite).

Tanzania mining makes up more than 50 per cent of the country’s total exports, of which a large part comes from gold.

The country has gold reserves of 45 million ounces, generating revenue of over a billion USD.

Such large reserves of natural resources available in the continent would definitely serve as a bolster to the takeoff of the world largest free trade area in the coming months and years.

How are you seeing our The Matrix News and the page you are on https://matrixliveng.com/facts-and-figures-of-africa-free-trade-afcfta?
Go to mobile version