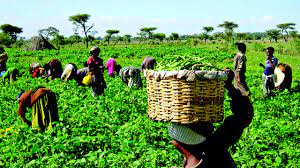 RIFAN Chairman, Mr Raphael Hunsa, said this in an interview with the News Agency of Nigeria (NAN) on Tuesday in Lagos.

Hunsa observed that many lands were un-utilised and abandoned in farming communities such as Ikorodu, Epe and Badagry.

He noted that lack of access to farmlands was affecting food production in the state.

Hunsa said that there was the need for farmers to upgrade their current paddy production capacity with the inauguration of Lagos Rice Mill in Imota.

He said that traditional rulers are the custodian of land within their communities and can interface with land owners on behalf of the farmers.

According to him, to meet the 240,000 metric tonnes of paddy demand of the mill yearly, there is a need for farmers to double or triple their present production capacity.

“If we are able to increase capacity on rice farming, that way we will provide more paddy and the project will not be redundant.

“We need to be feeding this project regularly and the only way we can achieve that is through continuous production but we do not have adequate land to farm.

“In fact, Lagos State Government is trying in the area of agriculture as they are doing their best to see that there is sufficient food for residents.

“My appeal goes to all the traditional rulers and ‘Baales’ in Lagos to release all un-utilised land to farmers for massive cultivation of rice.

“Lack of land is a major barrier affecting rice farmers in Lagos and we have many lands lying fallow in various communities without being utilised,” he said.

He urged the state Ministry of Agriculture to interface with the traditional rulers on allocation of land for agriculture purposes.

“We want the government to approach the traditional rulers to release more lands, so that we can cultivate more and encourage more people to come into rice production.

“This way, there will be sufficient farming to bridge this space.

“If these our traditional rulers, chiefs and Baales’ cease to release their land, where do we get lands to cultivate and be self-sufficient?,” he asked.

The Lagos Rice Mill is a two × 16 metric tonnes per-hour mill standing on an area of 8.5 hectares of land.

The project has an annual paddy requirement of over 240,000 metric tonnes to produce 2.5 million bags of 5Okg rice per annum.

The mill would generate about 250,000 direct and indirect jobs to Lagos residents.