Yoruba Monarchs To Combat Insecurity in Southwest With Traditional Method

Insecurity In Southwest – By Babajide Okeowo 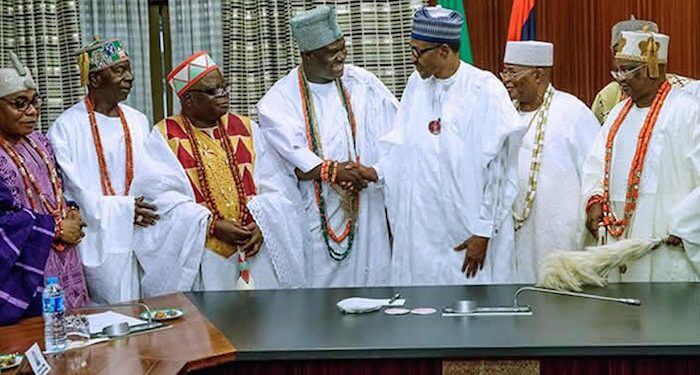 Traditional rulers in Nigeria’s Southwest states have dropped a hint that they might resort to traditional methods to combat rising insecurity in the region.

The Owa of Idanre Kingdom, Oba Fredrick Aroloye, dropped the hint at the weekend when the Ooni of Ife, Oba Enitan Ogunwusi visited him in celebration of his 45th coronation anniversary.

Oba Aroloye charged the Ooni of Ife with the need to arrest the spate of insecurity in southwest through unconventional means.

Addressing Ooni, Oba Aroloye said: “It’s documented that you, Ooni of Ife, are the Arole of Oduduwa. I have many documents here with me to prove that.

“You have many vital roles to play now at this point. There’s insecurity in Yorubaland. We need to tackle this unconventional way.

“Before the coming of the colonial masters, our fathers had their way of tackling insecurity. We still have these things with us. We haven’t thrown everything away.

“We, all Yoruba Obas, should begin to have meetings to see how we can protect our land and brainstorm on different salient issues bordering our people.

“It is high time you began to organise meetings of Obas in Yorubaland. We all sons of Oduduwa must begin to have meetings from time to time.”

Oba Aroloye disclosed that Oba Ogunwusi would be the third Ooni that had visited Idanre because of the relationship between the two towns.

Idanre was initially known as Ife Oke before the name was changed to Idanre, which was derived from the magical prowess of the people.

In his address, the Ooni of Ife agreed with Oba Aroloye on the issues raised, promising to address them all.

He promised to return to the Rock town soon to climb the popular Idanre Hill, which harbours several tourist centres.

Though 95-year-old Oba Aroloye, said he went to the hill last over 20 years ago, he implored the Ooni of Ife to visit the hill so that he could be acquainted with several traditional heritages conserved on the hill.

Some sons and daughters of the town were honoured by Oba Aroloye as he installed them as chiefs of Idanre kingdom.

Among many dignitaries that graced the occasion is the former Chief of Defence Staff, General Alexander Ogomudia (rtd).