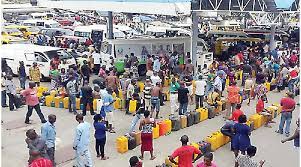 Amid the lingering nationwide fuel scarcity, the Independent Petroleum Marketers Association of Nigeria (IPMAN) on Friday said the volume of products supplied to marketers has dropped by about 40 per cent.

IPMAN Deputy President, Zarma Mustapha, who made a live appearance on Channels Television’s Sunrise Daily, said the country is in a complex situation owing to the “burden of subsidy that government is carrying”, which he said is no more sustainable.

According to him, the volume that the Nigerian National Petroleum Company Limited (NNPCL), the sole importer of Premium Motor Spirit otherwise called petrol has been hitting hard on the “paucity of the funds” of the Federal Government.

“Because of that, the supply that we receive as marketers at the loading points, we believe we don’t get what we usually get – even 50 per cent of what we get,” Mustapha said.

“Some [time] in July, August, the volume of liftings (sic) we had and what we have today has dropped by about 50 per cent or 40 per cent.”

The NNPC, on November 29, 2022, said it had a “national PMS stock of over 2 billion litres. This is equivalent to over 30 days of sufficiency”.

However, Mustapha theorised that the lingering presence of queues at fuel stations across the nation may be due to the high cost of subsidy.

“As of today, with what is trending (sic) in the private depots, the volume available is not enough. The private depots also contribute by not giving the product as it is being regulated by the NNPC.”