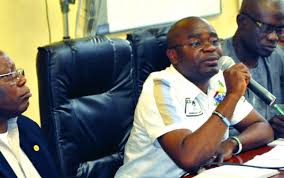 Vice Chairman of the Presidential Task Team on the Restoration of Law and Order in Apapa Port (PTT-RLO) Kayode Opeifa has said his Team has erased traffic gridlock in Apapa.

He however said all the gains of the Team in the last 19 months may be reversed if the state government and concerned Federal Agencies managing the port area does not take charge of the traffic management.

Opeifa stated the position on a day the Lagos State Governor Babajide Sanwo-Olu paid a working visit to Apapa, where he had announced directed the Lagos State Traffic Management Authority (LASTMA) and the Area B Police Station to move into Apapa and manage traffic in the Port area.

Opeifa’s position was contained in a 44-paged exit report exclusively obtained by The Nation, where he detailed the activities of the PTT-RLO established by President Muhammed Buhari on May 22, 2019.

Titled: Update and Exit Report of the Presidential Task Team activities on the Restoration of Law and Order in Apapa (PTT-RLO), and submitted to the Governor in September 2020, Opeifa said the team has succeeded in taming the Apapa gridlock.

He said the PTT has come up with an efficient and effective Traffic management plan for the entire port area traffic (including the cargo, fuel distribution and business district traffic). Traffic Management Direction currently deployed is as contained in the Presidential Task Team released Operational Order, Guidelines and Modus Operandi  which incorporates Port Operations, Incident rescue management, Truck Throughput and Park Management and special purpose Apapa Port Area Traffic Management with strict enforcement protocols. For ease of operations and as agreed by all stakeholders, its efficiency is largely hinged on the cooperation of all major stakeholders (NPA, Manufacturing concerns, Shipping Lines, Terminal Operators, Tank Farms operators, PPMC and transporters) and understanding/engagement of other stakeholders who are clients to the Major stakeholders (NPA was expected to brief its clients via stakeholders engagement and public publication since July 20, 2019) with robust capacity to use enforcement where any stakeholder fails compliance as we currently do.

He said the current; operating system backed by appropriate enforcement has the capacity to clean up any congestion within two to six hours with the cooperation of major stakeholders and an effective incidence and recovery management system by LASTMA and LRU.

According to him, “with law and order restored, what we need to focus on now should be the pending issues that could lead to gridlock, which are; efficient and effective Enforcement, the in port congestion as a result of port operations and its efficiency, multi-modal evacuation of cargo, Port Truck throughput effectiveness and management, empty container return handling and management, corruption in Port operations and management processes by people who have no business with the Port system and cargo clearance.”

He said the Office of the Vice President (OVP) which supervised the entire initiative had done a great job in ridding the nation of the big shame that the Apapa Port has become before May last year, praising the efforts of all the stakeholders for the far-reaching gains and successes recorded by the Team in the first five months of its operation in Apapa.

Opeifa said the Task Team has achieved tremendous successes of keeping stationary trucks off the highways especially on the Ikorodu road, inner streets of Surulere, Apongbon Bridge, Eric Moore area and Eko Bridge up to Ijora 7up and Ijora Olopa. Same for Orile/Iganmu end to Mile 2 end of Lagos Badagry Express Way as of 30th of Sept, 2020 pending the introduction of the electronic call up by NPA.

“We have consistently kept stationary trucks off the above mentioned highways. Same for Marine Bridge up to Point road except trucks on queue from LTTP and others as a result of Apapa Port operations especially as it relates to the capacity and efficiency of operations at APM Terminal, Apapa Port to handle Empty Container Return and other deliveries,” he added.

On the Apapa Oshodi Tin Can Axis, Opeifa reported that the Team has recorded tremendous progress from Cele to Mile 2, and Coconut to Tin Can Port gate, adding that as a result of ongoing construction, much enforcement is still required between Mile 2 and Coconut where we have Trucks and Tankers struggling for limited space as they approach Coconut due to ongoing road construction works, thus giving an impression of stationary trucks.

“Effective and Efficient Port Terminal Operations, proper management of the TITP, the understanding and cooperation of the Federal Controller of Works, Lagos and the contractor handling the road reconstruction works are critical.

“The good news is that the One-way drive activities has stopped, Truck throughput improved and despite all the issues around inbound Lanes closures, It now takes less than 24hr from Mile 2 to the Port gate as against weeks with huge consequences before the PTT arrival.

Access for residents along the Vanguard Newspaper and NIMASA office no longer a serious challenge to regular cars and trucks approaching the Kirikiri light terminal used for barge operations.

“Despite, the increased construction activity around Tin Can Island Port gates, Truck access into the Tin Can Port is under proper management to the satisfaction of Seaport Terminal Operators, Port Managers and Truck operators,” Opeifa said.

On the Coconut to Port gate and Liverpool Road, the Executive Vice Chairman (EVC) said due to the ongoing construction works along the corridor, both inbound and outbound lanes to the Tin Can Port gates are closed for Port Truck throughput except a batch by batch movement of inbound trucks from SunRise to Port via Abuja access and TITTP, adding however that tankers are beginning to take advantage of the service lane since the road is about 95 percent completed resulting in no physical presence of stationary trucks on the road unlike hitherto.

He said the greatest obstacle to the successes of the PTT-RLO, are from “Corruption-fight-back, which have been battling the Task Team as a result of the dismantling of the machinery that ensures some unscrupulous operators benefit from the confusion at Apapa until May 2019.

He said the Corruption Fight Backs includes “movers”, insider stakeholders, some enforcement officers among others,” adding that to the best of its ability, the PTT have “effectively removed most prospects for extortion, especially as it relates to Truck “Movers” activities (middle men “flying” trucks at night for a consideration) and impersonators collecting money or acting on behalf of authorities as far back as October 2019 until they were able to convince some port Major stakeholders to challenge the Presidential mandate.”