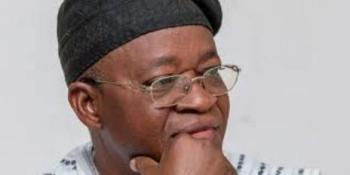 The Osun Election Petitions Tribunal on Friday adjourned for judgment the petition filed by former Gov Gboyega Oyetola, challenging the victory of Sen. Ademola Adeleke of the Peoples  Democratic Party (PDP)  in the July 16 governorship election.

The Chairman of the three-man panel,  Justice Tertsea Kume, reserved the judgment for a later day to be communicated to parties in the matter after the petitioner and respondents had adopted their final written addresses in Osogbo, the capital.

Oyetola and the All Progressives Congress (APC) had on Aug. 5, submitted a petition before the tribunal in Osogbo.

Oyetola and APC were challenging the election results from 749 polling units across 10 local government areas of the state for various alleged electoral malpractice, especially over-voting.

The Independent National Electoral Commission (INEC) had declared Adeleke as the winner of the governorship election, having polled 403, 271 votes against 375,027 polled by Oyetola.

Earlier, Counsel to APC, Mr Lateef Fagbemi (SAN) in his final written address,  said all documents and processes were filed and submitted on Jan. 8.

Fagbemi adopted all submitted written documents and objections on point of law and also argued all objections earlier filed by the respondents, asking the court to accede to all his submissions and requests.

Fagbemi cited sections 51 (2) and 47(2) of the Electoral Act on cancellation of polling units where numbers of votes exceeded the numbers of registered and accredited  voters .

Also, Mr Akin Olujimi, SAN, counsel to  Oyetola, said the testimonial tendered by Gov. Adeleke did not show that he attended Muslim Grammar School in Ede.

Olujimi dismissed the claim by the respondents that Gov. Adeleke was eligible to contest election and he submitted that the testimonial that Adeleke tendered was fake because it was obtained in 1988 from Osun State, while Osun was actually  created  in 1991.

According to him, the respondent should  have pleaded that the mistake was a typographical issue but  which they never did.

Olujimi said all the documents tendered by the respondent’s counsel had no connection with each other, with no probative value .

INEC Counsel , Prof. Paul Ananaba, SAN, in his own submissions, tendered to the court his final written addresses dated Dec. 30, 2022 and filed the same date, with replies on points of law  dated Jan. 9 and filed Jan.11 respectively.

Ananaba adopted all documents submitted as his final written address, saying the  duty of INEC was to certify that the respondent, Adeleke, was qualified to contest the governorship election which they did .

He said, “the petitioners complained of over- voting and infractions by picking 749 polling units to contend with from 1750 polling units, according to the first respondent witnessed (RW1) .

” If deduction of 1750 units was carried out from the total 3763 units in the state, the second respondent will still emerge as winner with over 20,000 votes.”

Mr Onyechi Ikpeazu, Counsel to Gov. Ademola Adeleke, also adopted all the tendered documents filed as its final written address and urged the tribunal to dismiss the petitioners application against his client.

Ikpeazu said that the argument against Adeleke’s certificates and eligibility to contest the governorship election had been addressed by the Court of Appeal.

On the issue of over-voting claim, Ikpeazu told the court that certified true copies of documents of accreditation was done through the BVAS machines , adding that BVAS was the primary source of accreditation.

Ikpeazu said that petitioners agents did not contest the results of any polling units on the day of election, despite that they also signed the results which were authentic .

” The entries in form EC8A tallied with figures on the forms as being contended by the petitioners .

“You can not determine over voting proper without the application of the BVAS machines,” he said .

Iziyon said the issue of forgery of certificates as contended by the petitioners  had been cleared in the judgment of the Court of Appeal and had no value.