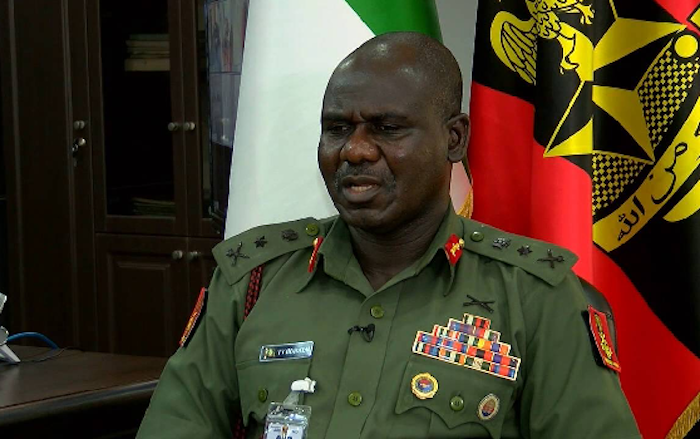 Previous article
Insecurity: What Buhari Needs To Do- Atiku
Next article
Ijaiya-Oladipo Appointed as Chief Financial Officer by UACN

Chief of Army Staff, Lt-Gen Tukur Buratai, has said the proposed investigation by the International Criminal Court (ICC) into allegations of war crimes and crimes against humanity allegedly committed by the terrorist group, Boko Haram, and Nigerian security forces, is capable of threatening internal security operations and dampening the morale of troops.

According to a statement issued by Army spokesman, Brigadier-General Sagir Musa, he said the decision of the ICC would be a setback for internal security operations, with attendant negative consequences on troops trying to contain the Boko Haram insurgency.

“The Nigerian Army’s attention has been drawn to a press release by the Prosecutor General of the International Criminal Court (ICC) on Friday 12 December 2020, alleging that she has found a reasonable basis to believe that ‘members of the Nigerian Security Forces (NSF)’ have committed acts constituting crimes against humanity and war crimes.

This was immediately followed by a release by the local branch of Amnesty International (AI) in Nigeria ‘demanding full investigation of atrocities by Nigerian forces.’”

There is no doubt such statement and instigation can distract the Nigerian Army troops with its demoralising effects. It will have negative consequences on troops’ morale, interest in military service by Nigerians and be a severe setback to all our internal security operations in the country.

However, the Chief of Army Staff (COAS), Lieutenant General TY Buratai, enjoins Nigerian Army troops to ignore the distractions and call on the gallant troops never to be worried or demoralised by these moves” the statement said.

Buratai enjoined troops to ignore the wicked, unnecessary distractions and direct troops to fully concentrate on the final defeat of Boko Haram/ISWAP terrorist group, which is in sight

The army chief also directed fighting troops to adhere to the rules of engagement, code of conduct, and standard operating procedure.

The Nigerian Army wishes to advise local or international organisations not to allow themselves be used to destabilise or destroy the troops’ morale by the sponsors of mischief in Nigeria” he added.

Recall that Buratai is in self-isolation with other generals and commanders, after the death of the General Officer Commanding (GOC) 6 Division, Nigerian Army, Port Harcourt, Major General Olubunmi Irefin. Irefin died of complications arising from the COVID-19 virus.

How are you seeing our The Matrix News and the page you are on https://matrixliveng.com/planned-icc-probe-a-threat-to-internal-security-says-buratai?
Go to mobile version