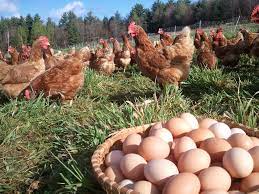 Some Poultry experts have given possible reasons for low egg production in the early days of the year.

The experts gave reasons for low or small-sized egg production in separate interviews with the News Agency of Nigeria (NAN), on Thursday in Lagos.

Mr Joel Oduware, a poultry processing consultant, said the weather conditions could not be scientifically responsible for low egg production.

“There are, however, so many factors to be considered as reasons for low egg production. These include; the breed of the bird, the hatchery and the place the birds were collected.

“However eggs are usually small in size in the early part of the year like January and February because all the matured birds (old-layers), have been sold out during the yuletide.

“At this period, lay birds replace the old layers and cannot produce as much, and such eggs are usually small and are referred to as pullet eggs.

“Naturally, the genetic breed of a laying bird or problems from the parent stock of the birds could be reasons.

“Also challenges with the bird feed may also negatively affect egg production. If the feed is wet or contaminated, it can reduce or hamper the birds productivity,” Oduware said.

“Low production of eggs by layer birds can be a factor caused by the parent stock, the feed quality, and management of the poultry farm can also affect egg production of the birds.

“All things being equal, there is no reason why a bird should not lay comfortably for a year.

“Weather condition cannot stop layer birds from producing eggs, it can only affect the size of the eggs.

“The dry season makes laying birds produce smaller sized eggs because the birds consume more water than feed because of the heat.

“Feed meal contributes nothing less than 80 per cent to production, so if the birds take more than they eat, it will surely affect their production,” Iyiola said.