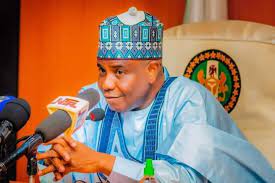 The News Agency of Nigeria NAN reports the two Bills are that of Zakkat and Waqf (Endowment) Commission as well as Arabic and Islamic Education Commission.

In his address, Tambuwal said the gesture was a great milestone in the history of the Caliphate and Nigeria.

The governor stated that the state government was not eradicating the almajiri system of education but improving it to a model system.

“The system we are presently implementing is the one that is more acceptable in the world.

“This system will enhance the living standard of our children and improve their educational capacity toward a greater society,” he said

Tambuwal appreciated the Sultan of Sokoto, Alhaji Sa’ad Abubakar III and the committee members that worked tirelessly toward ensuring the success of the exercise.

Abubakar III thanked the State House of Assembly, members of the House of Representatives in the state and the committee members for their dedication in ensuring the successful passage of the two bills.

He emphasised the need for governments to accord more priority to the teaching of children in their own mother tongue.

Abubakar III said: “Doing so will give room for proper understanding of what the children are expected to learn toward attaining a greater future.”

Earlier the Guest Speaker, Prof. Bashir Galadanchi of Bayero University Kano, said the ALNIZAMO system was the best as it gives full recognition of scholars, students, leaders and Islam.

He said the system was not only to support Almajiri Education, but an effort toward addressing a lot of the country’s challenges in the areas of poverty, hunger and security as well as enhance the living standard of the citizens.

Also speaking, Malam Lawal Maidoki, the Chairman, Zakat and Endowment Commission, described Zakkat and Endowment institutions as a means of poverty reduction and economic development of any nation.

According to him, the importance of the institution cannot be over emphasised especially in the country’s present situation.

“This institution will surely address the reported 2022 survey by the National Bureau of Statistics, which revealed that 63 per cent of persons living within Nigeria indicating about 133 million people are multidimensionally poor,” he said.

The winner, Malam Nura Bello, an indigene of Sokoto State, who clinched first position in the state and the county was turbaned “Moddibon Sokoto” by the Sultan.