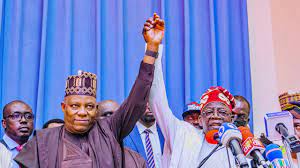 Bola Tinubu, the presidential candidate of the All-Progressives Congress (APC), has vowed to make Aba, a commercial hub in Abia State a major exporter of goods if he is elected president.

He made this known on Tuesday while speaking at a campaign rally in Umuahia, the capital city of Abia.

The former Lagos State governor stated that Aba has the potential for manufacturing clothing, appliances, and cars on a large scale.

He also spoke on his plans to strengthen the country’s digital economy and improve on the nation’s power generation and distribution.

“Your state is a centre of production and industry. Today, my hope is renewed that together we can achieve industrial activity unprecedented in our history,” he said.

“Aba market is one of the largest in West Africa. I see it becoming a major export hub of all types of manufactured goods to Asia, North and South America, and Europe.

READ ALSO: 2023: Tinubu Fires Back At Naja’atu, Says She Was Sacked For Being A Mole

“I see this state humming with industrial activity such that it will become a world-famous centre of activity from the manufacture of clothing to that of cars, appliances, and computers and their components.

“We will give you the tools to make your businesses as competitive and productive as any on earth.

“The teeming youth population standing before me makes my heart glad. We have good plans for you! God’s Own Youth! You are blessed! We will empower you. There will be jobs for those who desire jobs by providing tax and other employment credits to employers, encouraging them to hire you.

“My government shall support those starting their own businesses. My digital economy plan calls for one million new jobs in ICT within 24 months in office.”

Tinubu also said that with his administration, the country’s security challenges would be addressed with modern technology.

“Security forces will be better trained and better compensated. They will exercise restraint when needed but will also show strength whenever put to the test,” he added.