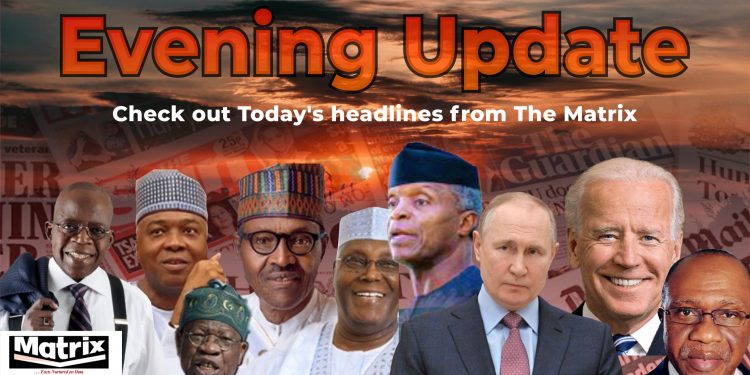 “For the travelling public, first we want to apologize to our teeming passengers in this difficult moment. Secondly, this will not happen in the future by the grace of God. The reason is simple, aviation is an essential service, the Act has been assented to by Mr President, so strikes and riots around our airports are prohibited by the laws of the land. Read More

”As a mark of honour to our dear departed brother, I hereby direct that all flags in Abia State PDP offices be lowered and flown at half-mast while all campaign activities for the party at all levels be suspended until Monday, 30th January 2023,” he said. Read More

“There have been uneven pump prices being dispensed by the filling stations across the country, which fields speculations that government may have begun to remove subsidy on petrol,” he said. Read More

Haillu said Arase’s nomination was in accordance with section 154, sub-section 1 of the 1999 constitution. According to him, sections two A and B of the Police Service Commission Establishment Act 2001, also required the President to nominate Nigerians of proven integrity as members of the PSC. Read More

The statement read, “I regret to announce the death of my dear father, Prof Eleazar Uchenna Ikonne, who died at the National Hospital Abuja today, 25th January 2023 at 4 am after a brief illness. Read More

“The anti-party activities among others include his indulgence with the Peoples Democratic Party (PDP), Akwa Ibom State, and his willful but unlawful disobedience of the directives of our great party, the APC,” the letter reads. Read More

“This is the biggest privilege and responsibility of my life,” he said. 44-year-old Hipkins is now tasked with reversing the government’s sagging popularity, which has been hampered by a deteriorating economy and a resurgent conservative opposition. Read More

Why I Dumped APC- Ex-Gov Bindow

His formal resignation, made via a letter to the APC chairman in his ward, did not come as a surprise, considering past expectations which fueled rumours and after the way his support organisation, the Bindow Support Group, BSG, has in the last three weeks been hobnobbing with the PDP and Governor of the state, Ahmadu Fintiri. Read More

She received the Best Original Song nomination for her collaboration with Rihanna on the song ‘Lift Me Up’. The duo was nominated in the ‘Best Original Song’ category. ‘Lift Me Up’ was one of Marvel’s ‘Black Panther: Wakanda Forever’ soundtracks. Rihanna co-wrote the soulful song with Tems, and the music was produced by Ludwig Göransson, and directed by Ryan Coogler. Read More

“There are concerns, especially (because) Mo is a player who never complains about anything. He had some issues with his knee that we are assessing at the moment and we will have to see how he evolves,” Arteta told reporters on Wednesday. Read More

How are you seeing our The Matrix News and the page you are on https://matrixliveng.com/top-10-stories-you-cannot-afford-to-miss-this-wednesday-evening-2?
Go to mobile version