What are the strongest currencies in the world?

The United Nation recognizes around 180 currencies as legal tender but which one holds the most value? Based on CMC Market report obtained by Matrix ,to compare the value of currencies, we have used the United State dollar as a fixed based currency. The strongest currency here is defined as the one that is most expensive in comparison to US dollar. That is , the currency that gives you the smallest return for 1 US dollar. 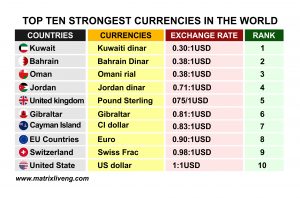 Known as the strongest currency in the world, the Kuwaiti dinar or KWD was introduced in 1960 and was initially equivalent to one pound sterling. Kuwait is a small country that is nestled between Iraq and Saudi Arabia whose wealth has been driven largely by its large global exports of oil.

You will receive just 0.30 Kuwait dinar after exchanging 1 US dollar, making the Kuwaiti dinar the world’s highest-valued currency unit per face value, or simply ‘the world’s strongest currency’.

The second strongest currency in the world is the Bahrain dinar or BHD. Like most Arabic currencies on this list, it is divided into 1000 smaller currency units, in this case, called ‘fils’. The Bahraini dinar is only used in Bahrain and is pegged against the US dollar.

Of similar value to the Omani rial, when trading 1 US dollar you will receive 0.38 Bahraini dinar.

The Omani rial or OMR is the national currency of Oman. Unlike most conventional currencies, the Omani rial is split into 1000 smaller divisions known as baisa. The Omani rial quickly rose in value after being introduced due to the success of Oman’s oil exports and being pegged against the US dollar.

A single US dollar will exchange for around 0.38 Omani Rial, which is nearly double the currency strength of the Pound sterling!

The national currency of Jordan is the Jordanian dinar or JOD, which earned the position as the 4th strongest currency in the world today. The currency became Jordan’s official currency in 1950 after it replaced the Palestinian pound.

1 US dollar is transferrable for around 0.71 Jordanian Dinar, earning the currency a rightful place in the top 5 most valuable currencies.

When exchanging a single US dollar, you will receive around 0.75 Great British pounds in return. This currency pair (USD/GBP), is commonly known as “cable” and is the 3rd most traded currency pair in the world..

The Gibraltar pound or GIP is the national currency of Gibraltar and is exchangeable with the British pound sterling at face value. Therefore, in Gibraltar you are free to use both GIB and GBP.

A single US dollar will buy you around 0.81 Gibraltar pounds, which is very similar in value to the pound sterling.

A United States dollar is exchangeable for around 0.83 Cayman Islands dollar- making it the only and strongest Caribbean currency on the list.

One of the newest currencies, the Euro or EUR is the official currency of 19 countries, which makes it the most widely used ‘official currency’ in the world. Countries where it is used as an official currency include Germany, France and Spain, and it is often known to be the world’s second reserve currency. It is also known to be the second most traded currency on the foreign exchange market only preceded by the US dollar. In fact, the EUR/USD or ‘Fiber’ is the most traded forex pair in the world, accounting for almost a quarter of daily forex trades.

In exchange for 1 US dollar, you will receive around 0.90 Euro, or 90 cents. This makes it the strongest currency in the list so far, and the 8th strongest in the world.

The Swiss franc or CHF is the national currency of both Switzerland and Liechtenstein.

1 US dollar will buy your around 0.98 Swiss Franc, so the Swiss franc comes in as the first currency to be higher value than the US dollar. This, however, is no surprise given that Switzerland is one of the most stable and wealthy countries in the world.

The Swiss franc is also the 7th most traded currency in the world, gaining its popularity as a safe bet when trading or storing currency, due to its strict monetary policies and low debt levels.

The US dollar is the currency of the United States and several other countries. It is the world’s primary reserve currency and is held by most central banks and commercial banks globally. Because of its widespread adoption, the US dollar also accounts for around 88.3% of daily trades in the foreign exchange market.

The US dollar holds many first-place titles, including the richest country in the world​, but remarkably only comes 10th when ranked as a contender for the world’s strongest currency.

All currencies on this list are compared for their currency strength relative to the US dollar. Therefore, the US dollar appears at 10th position, as 1 US dollar is worth exactly that – 1.0 US dollar.