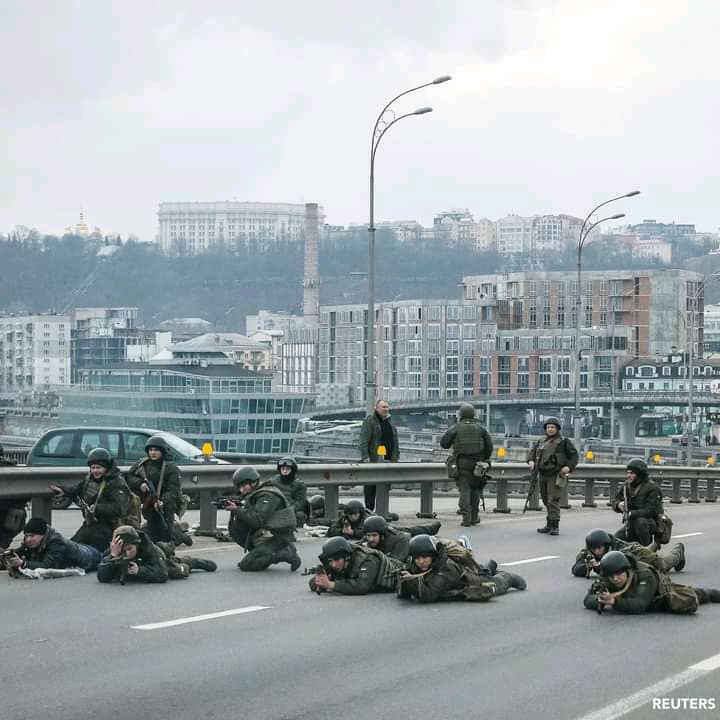 Ukrainian and Russian forces fought on the outskirts of Kyiv on Friday, the second day of Russia’s invasion of Ukraine, as diplomatic efforts to quell the violence continued and Western nations moved to shore up allied defenses.

Explosions were heard over the Ukrainian capital early Friday, and The New York Times reported it had “verified” video of the blasts showing “fiery debris” falling on Kyiv. The Times also said the video “appeared to show at least two surface-to-air missiles being fired near Kyiv before the explosion.” In a Tweet, the Times also said Ukraine’s Defense Ministry urged people in the capital to stay indoors and “prepare Molotov cocktails.”

Additionally, sirens were heard in the western Ukrainian city of Lviv, not far from the Polish border, where many foreign embassies had temporarily relocated.

Ukraine’s Office of the President said it is ready to open negotiations with Russia to agree on “neutral status,” but it wants security guarantees in return. “We should stop this war,” an adviser to the president said. Russia said it will not negotiate until Ukrainian soldiers lay down their arms.

Meanwhile, U.S. President Joe Biden and NATO heads of state and government hold a virtual meeting Friday morning. Earlier U.S. Vice President Kamala Harris will join a virtual meeting with leaders of the Bucharest Nine – a grouping of NATO members on the eastern flank of the alliance.

NATO has activated its defense plans for member states in the region. The U.S. has not deployed any troops to Ukraine, but it has sent forces to NATO member countries. Ukraine is not a NATO member but wants to join the alliance – something Russian President Vladimir Putin vehemently opposes.