Updated: Nigeria Crash Out Of 2021 AFCON 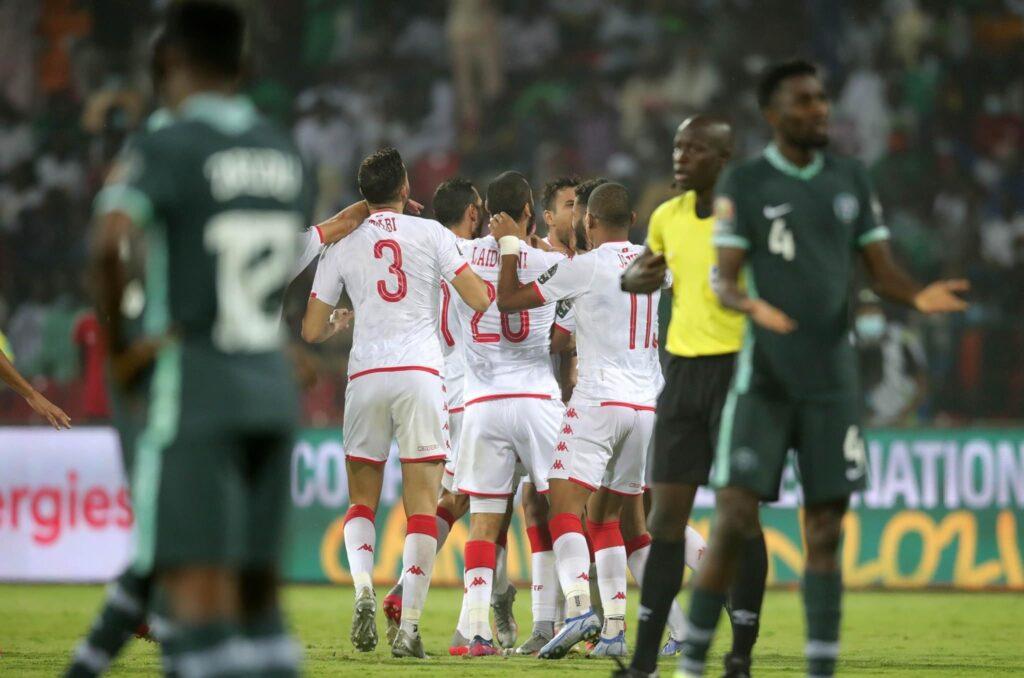 The Super Eagles of Nigeria has crashed out of the 2021 Africa Cup of Nations. They lost one-nil to Tunisia in their Sunday encounter in the Round of 16.

Tunisia shocked the Super Eagles of Nigeria by scoring two minutes into the second half via a shot from veteran Youssef Msakni.

The North Africans now face Burkina Faso, who eliminated Gabon after a penalty shootout, in the quarter-finals of the flagship African tournament next Saturday.

Nigeria had a good chance to level at the start of added time when substitute Umar Sadiq got behind the defence and fired across goalkeeper Bechir Ben Said only to see his shot trickle wide of the far post.

Msakni struck on 47 minutes and Nigerian hopes of leveling were dealt a major blow midway through the second half when Alex Iwobi was red-carded.

Nigeria started as favorites to reach the quarter-finals having won all three group matches in the northwestern city, with record seven-time champions Egypt among their victims.

Tunisia, making a record 15th consecutive Cup of Nations appearance from 1994, fell to Mali and minnows Gambia in the first round and squeezed into the knockout phase among the four best third-placed teams.

While Nigeria was able to choose 12 substitutes, Tunisia could manage only eight due to a coronavirus outbreak in the camp.

Also missing due to Covid-19 was Tunisia coach Mondher Kebaier, who was isolating in coastal city Limbe at the other end of the central African country.

Apart from being the more impressive in the group phase, the Nigerian Super Eagles also boasted an unbeaten record in five previous meetings with the Carthage Eagles, winning three and drawing two.

A lackluster opening half produced only one shot on target, from Tunisia, as Nigeria were unable to recapture the first-round form that made them the only team among the 24 to boast a 100 percent record.

In a tournament full of surprises, another one arrived just after half-time when Qatar-based Msakni put the one-time Cup of Nations champions ahead.

Msakni, playing in his seventh Cup of Nations tournament, dribbled across the edge of the box before unleashing a curling shot that entered the net off the left arm of goalkeeper Maduka Okoye.

As Nigeria battled to break down a well-organised Tunisian defence, they suffered another blow midway through the second half when Iwobi had a yellow card changed to red after a VAR check.

Iwobi, an Everton winger and one of many Premier League players in Cameroon, had just come off the bench when he stamped on the ankle of Msakni.

Another substitute, Naim Sliti, almost doubled the Tunisian lead with 15 minutes remaining when he fired a shot toward the corner of the net only to be thwarted by a superb two-hand save from Okoye.

Nigeria had a chance to level as time ticked away, but Moses Simon sent a free-kick from just outside the box over the crossbar.