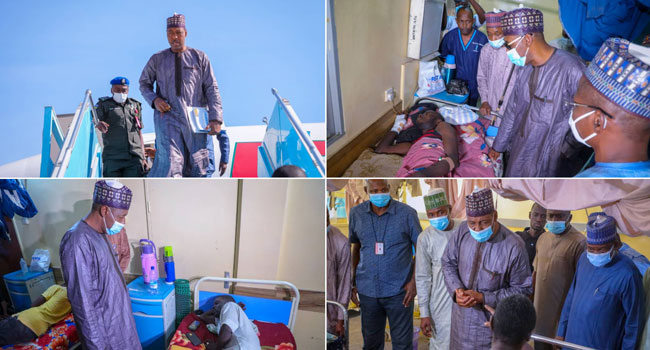 Governor Babagana Zulum of Borno, on Saturday, visited some hunters injured by a bomb blast, while on patrol in Kayamala village in Konduga Local Government Area on Wednesday.

The visit follows the blast, 16 of the hunters were injured, while seven died, including their leader, Bunu , as they rushed to intervene in a nearby village, after receiving information that some insurgents had rustled cattle in the area.

Zulum was received at the University of Maiduguri Teaching Hospital by the Commissioner of Sports, Alhaji Sainna Buba who informed him that 11 of the hunters had been discharged remaining four, who were also responding to treatment.

Buba said their hospital bills had been taken care of, while livelihood support had also been provided to the families of those affected, as directed by the governor.

The governor, who prayed for their fast recovery and for the souls of those who paid the supreme prize, urged the people of Borno to continue to remain resilient in seeing to the end of insurgency in the state.